The Band has now completed the last of its outside engagements for the summer/autumn, playing on the High Street in Peebles on Saturday mornings and also recently playing a Concert in Wilton Park, Hawick with over 100 musicians from all eight bands in the Scottish Borders (including Langholm). This was a most enjoyable experience for players and audience alike.

With the nights now becoming longer, the Band is buckling down to prepare for the Borders Entertainment Contest being held in Jedburgh Town Hall on Saturday 4th November.  There will be 20 bands competing and each band will play a varied own choice programme of no longer than 15 minutes each.  It should be another great experience for the members of the Band – young and old.  Our conductor at this contest is Peter Holmes and he has already picked our programme and started detailed rehearsals so we can play the best we can on the day.

We were lucky to have the services of two local musicians to conduct the band at rehearsals during the last 2 months – namely Vaughan Fleishfresser who currently conducts the Peebles Concert Band and Warren Lindsay, a senior member of the Royal Marines Scotland band.  Both were unable to commit to conducting us for the longer term but we fully appreciated their time with us and thank them most sincerely for their support. We hope they will both be available to help us out again in the future.

We are not holding our customary Duck Race this year – this has nothing to do with the rumour that the writer fell in the Cuddy last year whilst chasing an escaping plastic duck whilst it headed off to swim the Tweed. Instead we are holding a Grand Prize Draw with 3 cash prizes and 7 non-cash prizes.  This is being drawn on 30th September and the winners will be advertised on the Band’s Website and Facebook page and in next month’s article.  Thanks to all those who bought tickets and especially to Bob Reid (Cymbal Player) for generating more ticket sales than any other member of the Band.

We are also pleased to record that the Band’s Junior/Development Band are now under the baton of Davy Robb.  Davy is a highly experienced music teacher in East Lothian and has had great success in setting up and conducting St Ronan’s Future Band in Innerleithen. No pressure on Davy but we hope he can also help our youngsters to develop to their full potential. Our picture shows some of our youngsters in the Band Hall and apologies to those who were not present when the photographer called.

One of our Solo Cornet players, Alexa Smith has just gone off to University in Glasgow and we wish her every success with her studies.  Whilst we hope to see Alexa playing from time to time when she is back in Peebles this means there is another vacancy in our ranks. If you or someone you know wishes to join the Band (no matter their age or experience) please email the Band Secretary on secretary.pbsb@gmail.com

Finally a reminder that the Band will be holding a Coffee Morning in the Burgh Hall, Peebles on Saturday 14th October (10 ‘til 12) – £1.50 payable at the door.  Hope you can make it. 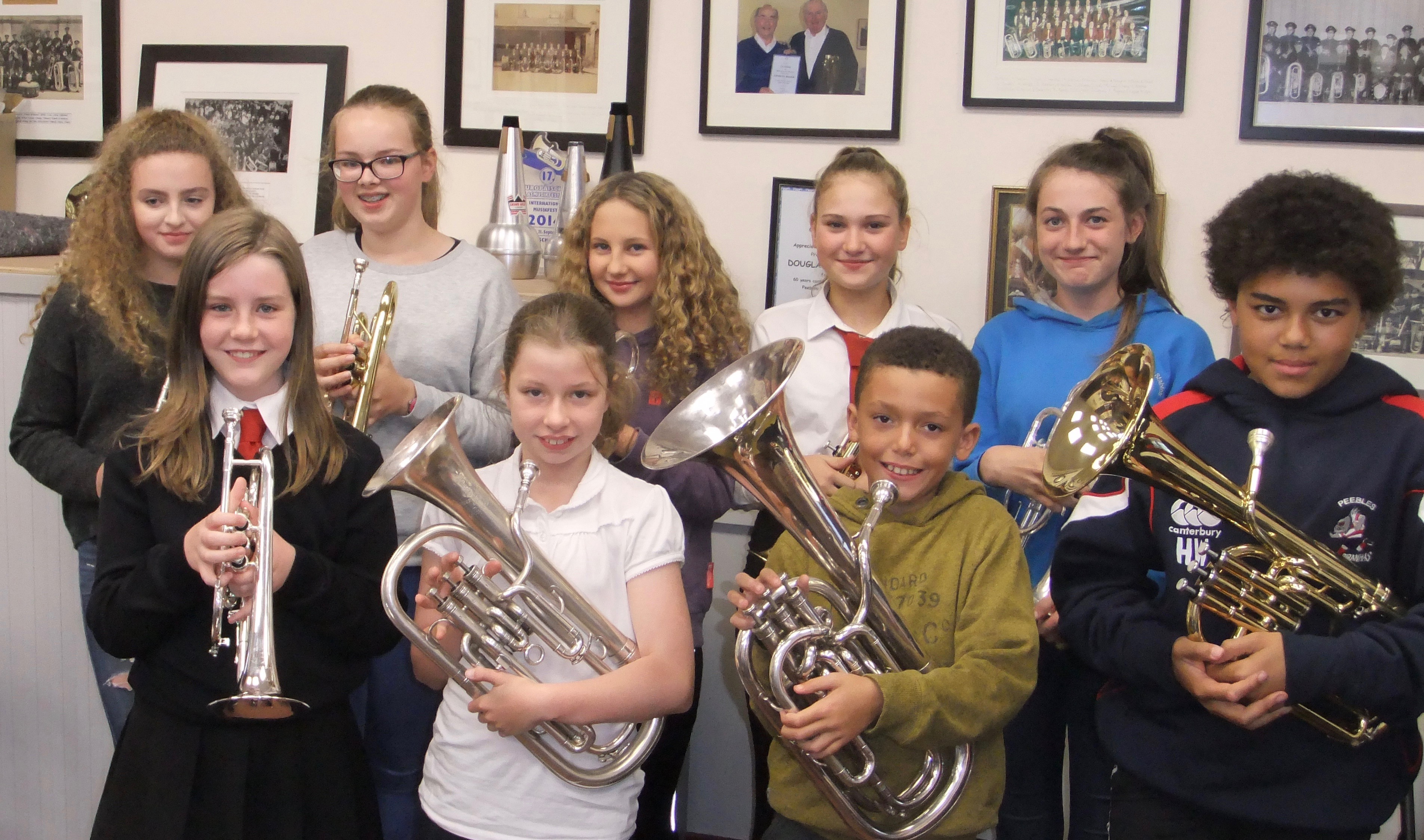