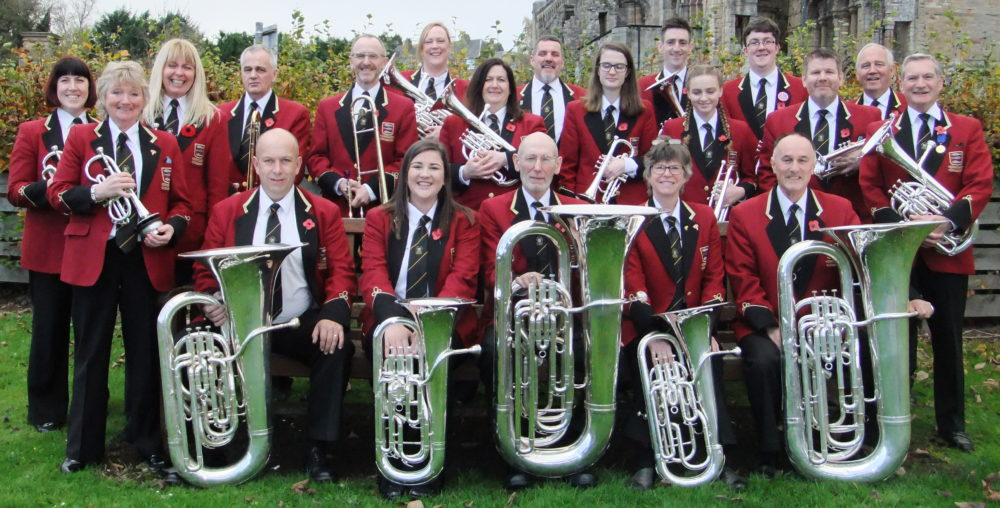 Band Rehearsals continue to be confined to playing on our own at home.  We are missing the regular twice weekly group rehearsals, the Conductor keeping us under control and, as well as the music, we are missing the banter from our fellow band members.

Until we are back to normal and we are able to report what we are up to, it may be of interest if we introduce you to some of our “well kent” faces in the Band. Our photo this month is of Ian Swanston – better known to everyone in the Band as “Swance” – holding his Baritone.

A Peeblean through and through, Ian joined the Band in 1966 at the age of 16 following in the steps of his older brother Tom who was already principal Euphonium player in the Band. Ian’s initial tutors were two of the Band’s most gifted musicians (and characters) – Donald Johnstone and Daniel T Ward.  When we have a party in the Band Hall (normally during Beltane week) we still sing their old songs and remember (and enact) their repartee with great fondness.

Despite going off to University and living and working in Edinburgh as a Research Biochemist for the Medical Research Council, Ian has continued to commute back to Peebles every week, weather permitting, to play with “the Band”.  There can be no more loyal servant to the Band.  He has played seven different instruments in the Band at some stage to help with the Band’s changing needs – that’s all the instruments with the exception of the largest one (Bb Bass) and the smallest one (Eb Soprano) and the most awkward one (Bass Trombone).  Over the years, Ian has also been Band Chairman, Secretary (twice), Treasurer, Librarian, Press Officer, Committee Member and Coffee Pourer at our four Coffee Mornings each year.  In other words, a true Peeblean and loyal and dedicated Bandsman.

Ian has played with the Band at no less than 51 Beltane Festivals – he didn’t manage this year because of the Covid 19 regulations but otherwise this would have been his 52nd.  What else could he do on a Beltane Saturday morning?

Being presented with the Scottish Brass Band Association’s 50-year medal in 2017 on the steps of Neidpath Castle during Beltane Week by his brother Tom, a past Warden of Neidpath was a particularly proud day for Ian (and for the Band).

Ian admits he has competed in 92 Brass Band Contests, starting with the Edinburgh Charities Contest in the Usher Hall in 1969 and is aiming to reach the 100 mark within the next 3 or 4 years.  We all hope to be there with him once we are allowed back to rehearse together in the Band Hall.  Thank you, Ian.